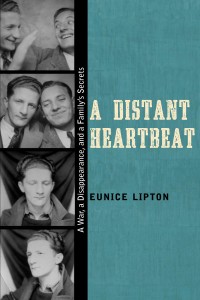 A Distant Heartbeat: A War, a Disappearance, and a Family’s Secrets, University of New Mexico Press

On May 20, 1938, a young man from the Bronx informs his parents that he is leaving for the Catskills to begin his new job as a waiter. Instead, he sails for Europe to join the Abraham Lincoln Brigade in the Spanish Civil War, the opening round in the fight against Hitler and Mussolini. The man, Dave Lipton—the author’s uncle—sends letter after letter home detailing his hopes and begging for forgiveness. He never receives a reply.

Decades later, Eunice Lipton stumbles upon clues for this silence, uncovering details of Dave’s
exhilarating political life in New York, his shuttered romantic life, and his deep friendship
with another volunteer. A Distant Heartbeat: A War, a Disappearance, and a Family’s Secrets  tells a tale of passion and heroism, centered on a fierce competition between brothers, a packet of missing letters, and the unforeseen results of family betrayal.

BUY AT THE STRAND BOOKSTORE

WHAT THEY’RE SAYING ABOUT A DISTANT HEARTBEAT:

From the review, A Distant Heartbeat: A War, a Disappearance, and a Family’s Secrets by Gina Herrmann, The Volunteer, July 1, 2018

[Lipton’s] memoir rehearses the many reasons why the history of the Lincolns never gets stale; it evinces a tight, intense narrative energy and an antifascist ethos that continually inspires and enchants…. Why had Dave Lipton’s death in Spain remained an open wound, a taboo subject that left [the author’s] grandmother sobbing at night behind closed doors? Why was [her] father Louis so defensive when Eunice asked to know more about the uncle she had always intuited was like her? [This is] a story of fraternal betrayal…. [Lipton] also presents the Spanish Civil War for Dave as an almost carnal experience of the emotional and bodily desire to meld with one’s comrades in the struggle against fascism. (Read FULL REVIEW HERE)

When the International Brigades marched away through weeping crowds, Dolores Ibárruri (‘la Pasionaria’) told them that they were history, they were legend: ‘We shall not forget you.’ When a group of survivors came back to a free Spain almost sixty years later, the crowds wept again and applauded and shouted ‘Gracias!’ Eunice Lipton was one of those who came back, but representing the dead. Her uncle David was killed on Hill 666, in the Ebro offensive; her book is a memoir about her search for him. He came from just that New York Jewish working-class background which Hochschild mourns. It was a hotly disputatious family, in which Lipton’s brash father, Louis, mocked his gentle brother for his political idealism (‘Nothing is worth dying for! He threw his life away!’) and deliberately hid his Spanish letters from the family. Louis’s daughter soon understood that this brutal mask hid grief and guilt, and she set out to penetrate the silence, to seek out old Brigade survivors who served with David, and found him so ‘sweet tempered … He didn’t have any sharp edges.’ ‘Without him and his friends,’ Lipton ends, ‘people like me would never have poured out into the street against the war in Vietnam, ridden the buses and marched for civil rights, created the women’s movement.’   (Read FULL REVIEW HERE)

Noted in THE NEW YORKER, April 4, 2016 (“Above and Beyond”):   The art and culture critic Eunice Lipton has exhumed her tangled backstory across four historical memoirs. The latest, “A Distant Heartbeat: A War, a Disappearance, and a Family’s Secrets,” traces the political awakening of her uncle Dave, who fled from their native Bronx in the nineteen-thirties to join the Abraham Lincoln Brigade in the Spanish Civil War. Through interviews and research, without much help from relatives, from whom she heard little of her uncle as a child, Lipton uncovered a seventy-five-year history to reconstruct his lost legacy. Tim Teeman, a senior editor at the Daily Beast, joins her in a discussion [at Strand Bookstore] sponsored by the Abraham Lincoln Brigade Archives.  New Yorker website link HERE

KIRKUS REVIEWS: Lipton … had always known that her father, Louis, had singled her out as his favorite and the one who would bear the memories of his younger brother, Dave…. [who] “could have gone almost anywhere” but who decided to dedicate himself to leftist politics and a conflict—the Spanish Civil War—that eventually killed him.… She was confronted with Louis’ inexplicable rage over letters that Dave had sent home from Spain…. Lipton began to [do] research… [She] unearthed the names of fellow soldiers who knew Dave and attested to his “gentleness and commitment….” She also learned …[about those] who chose to fight for Spain: passion drove them, but so did a burning desire to “[b]ecome part of something” greater than themselves. Their stories and testimonials allowed Lipton to imagine her uncle, his world, and her father and eventually uncover a bitter family truth…. The abiding love [Lipton] reveals for the uncle she never met is heartfelt…. Well-researched and often stirring.

Eunice Lipton has written the story of a double voyage of exploration: into the mind of her uncle, who died for his beliefs before she was born, and the mind of her father, who kept a shameful secret for decades afterwards. The result is a heartfelt, eloquent book, a most unusual addition to the literature on the Spanish Civil War.–ADAM HOCHSCHILD, author of To End All Wars: A Story of Loyalty and Rebellion, 1914-1918.

The protagonist of A Distant Heartbeat is a man Eunice Lipton never met who died in a war being fought before she was born. Yet both the man and the war have haunted her throughout her life. Out of that dream-like experience Lipton has fashioned an unusual and compelling memoir in which the actual and the imagined are vividly braided together.—VIVIAN GORNICK, author of The Odd Woman and the City: A Memoir

Eunice Lipton goes beyond memoir to explore the subliminal legacies of a traumatic event, showing how history survives almost invisibly to affect future generations. Like a jeweler turning a stone, she reveals various facets of a family story that illuminates both past and present.—PETER N. CARROLL, author From Guernica to Human Rights: Essays on the Spanish Civil War

A beautifully conceived quest-driven family memoir subtly intertwined with a cultural and political history of Jewish-immigrant New York City in the decades preceding World War II. Given its stylistic clarity, vivid approach, and its ‘detective story’ qualities, readers will be unable to put it down.—LEO SPITZER, Vernon Professor of History Emeritus, Dartmouth College, author of Hotel Bolivia: The Culture of Memory in a Refuge from Nazism

Eunice Lipton’s A Distant Heartbeat is an intriguing memoir about an uncle she never met, set within the much broader context of the international brigades who fought against fascism in the Spanish Civil War. A well-told tale of idealism, diaspora, and both personal and political heartbreak, it draws the reader into the author’s lively (and dysfunctional) immigrant family until Uncle Dave’s fate resonates with us too.—LUCY R. LIPPARD, author of Undermining: A Wild Ride Through Land Use, Politics, and Art in the Changing West

A Distant Heartbeat is a deeply moving, impeccably written homage to an uncle who fought and died in the Spanish Civil War.   But in addition to an intimate portrait of an idealistic young man and the Jewish immigrant world that created him, Lipton also asks a question as pertinent today as it was when her uncle, Dave, joined the Abraham Lincoln Brigade.  Why is one brother willing to die for an idea, while another brother thinks it is a wasted life?—JILL CIMENT, author of Act of God

“A Distant Heartbeat” evokes the details of a Latvian Jewish immigrant family’s life in New York with novelistic precision. We hear their voices, feel the complexity of their emotions and catch telling glimpses of their political, social and cultural milieux.

Lipton presents herself–as family member, author and sleuth–throughout the story. She is both judicious and forthright in her shifts from narrator to commentator. Ultimately, she has made “personal history” more than synonymous with “memoir.” She has successfully merged disparate nonfiction viewing angles–the wide angle vision of history with the closeup view of personal testimony and reflection–to illuminate Dave’s remarkable journey and her own. The result is thrilling.

At a time when America and the world once again seem as roiled by political turmoil as they did in the 1930s, “A Distant Heartbeat” gives us new ways to think about relationships between our personal and our political investments.–JUDITH WILSON-PATES, art critic and art historian [READ FULL REVIEW HERE]

In delving into the intimate corners of her family’s relationships, Lipton masterfully unravels a story of a betrayal, of loss and bitter regret and sorrow, that brings the uncle she never knew flickeringly to life for us almost as quickly as he is lost.—CAROLINE BROTHERS, author of Hinterland [READ FULL REVIEW HERE]

This book is a page turner. The tragedy of two brothers locked in love and betrayal, set within the larger tragedy overtaking Europe in the middle of last century. Lipton is a passionate investigator of human motives, those of her uncle and those of her father–and in the drama of idealism and cynicism, the reverberations go on and on.–ALICIA OSTRIKER, poet, author, two-time National Book Award Finalist