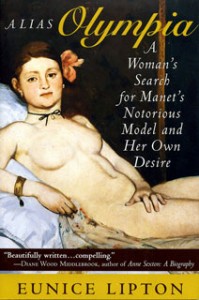 EUNICE LIPTON WAS A fledgling art historian when she first became intrigued by Victorine Meurent, the model who appeared in Edouard Manet’s most famous paintings—Olympia and Luncheon on the Grass–only to vanish from history in a haze of degrading hearsay. Through the streets of Paris, this American art historian sets out on an inquiry into the life of the model. Had this bold and spirited beauty really descended into prostitution, drunkenness, and early death—or did her life, hidden from history, take a different course altogether? Lipton’s search for the answer combines the suspense of a detective story with the revelatory power of art, peeling off layers of lies to reveal startling truths about Meurent—and about Lipton herself. As the pieces of an untold story begin to accumulate, something unforeseen happens to the author. Every step she takes to undo the erasure of Meurent’s life brings her face-to-face with the boundaries of her own. Every day she loses herself a little more in the other woman. Finally, their destinies become inextricably entangled.

WHAT THEY’RE SAYING ABOUT ALIAS OLYMPIA

In this wonderfully digressive blend of art history and autobiography, Eunice Lipton chronicles her arch for Victorine Meurent, the model for two of Edouard Manet’s most famous paintings, “Olympia” and “Dejeuner sur l’Herbe.” …[M]uch to the reader’s delight, Ms. Lipton has done what she set out to do: rescue Victorine Meurent from history. It’s a marvelous recovery.–NEW YORK TIMES BOOK REVIEW

Think of ALlAS OLYMPIA as a Canterbury Tale; a life-story told on a pilgrimage. It is an exploration in a dizzying variety of senses, from [Lipton’s] laborious attempt to unearth the real life of her subject to reflections on her own childhood and career to the igniting effect of the feminist movement…its humanity is entire.–RICHARD EDER, THE LOS ANGELES TIMES

A clever, unorthodox, enthralling book which combines criticism and fiction in elegant symbiosis…. It is cultural history at once learned, provocative, original and unstuffy.–FINANCIAL TIMES OF LONDON

This shouldn’t work–a mingling of autobiography and art history–but Lipton has accomplished a rare alchemy in ALIAS OLYMPIA.–THE VILLAGE VOICE

Beautifully written — brisk, poignant and humorous….a witty critique of the art historical profession and a sexy, sad memoir with a happy ending.–LUCY LIPPARD, THE WOMEN’S REVIEW OF BOOKS

The elegance and clarity of Lipton’s prose make ALlAS OLYMPIA a joy to read. Significantly advances our knowledge about lesbians in the visual arts.–LAMBDA BOOK REPORT

ALIAS OLYMPIA is the record of a process by which one woman gave herself permission to seize the tools of language and, rather than add another tome to the shelves of academic feminism, to use them to make herself into the kind of writer she always wanted to be: to focus on the search; not the found truth; on the woman not the credentials; and on the child, yearning still, behind the adult.–THE NATION

In a book that defies all the most hallowed conventions of biography and criticism, Eunice Lipton sets new standards for both. ALIAS OLYMPIA, perhaps because of its flagrant violation of all the rules of academic criticism, is one of the most eloquent arguments for the importance of art history that I have ever read.–ELIZABETH LICATA, THE BUFFALO NEWS