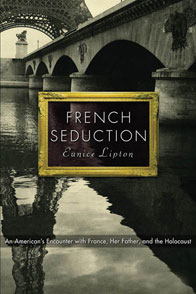 French Seduction: An American’s Encounter with France, Her Father, and the Holocaust, Carroll & Graf Publishers

FRENCH SEDUCTION is a fierce book about pleasure and hatred. Growing up in the Bronx, Lipton falls in love with France across her father’s Parisian fantasies and his own unpredictable charms. He beguiles her with stories of French cafés, great literature, beautiful people. But he’s fickle, he wanders, he disappears. She ends up living in a country that does the same. Pleasuring the senses never stops in France, but neither does the French distaste for outsiders. Tales of French seduction and betrayal grip the reader as Lipton couples the sunshine of Impressionist painting with the anti-Semitism of the Dreyfus Affair; the Roaring Twenties with sneering xenophobia; the juicy voluptuousness of 18th century Versailles with the unspeakable poverty just beyond the Chateau’s gates. As Lipton tries to forgive her father’s capriciousness, she also is trying to forgive France for the crime that is at the emotional heart of this book: France’s betrayal of its Jews to the Nazis. Lipton uncovers France’s debilitating weakness, as well as her father’s long hidden shame. This passionate blend of cultural history and autobiography makes French Seduction unlike any other book about France today.

WHAT THEY’RE SAYING ABOUT FRENCH SEDUCTION

Before I read French Seduction I never understood France. I’d been there many, many times and had many business and personal relationships there but until I read this book I never realized what a Francophile I was, nor what a Francophobe. Eunice Lipton recounts her own experience, her own life and in the process manages to capture something bigger. What unfolds is a gripping story of France seen from the perspective of a Jewish American woman. French Seduction is a must-read for anyone who wants to understand France as she relates to America, the rest of Europe and for that matter the world. Did I mention it’s a page-turner?–ISAAC MIZRAHI

In this intricately structured and trenchantly honest book, Eunice Lipton turns her incisive, witty, loving, and fearless eye on the ironies and paradoxes of her life in France. Her observations about the art, culture, anti-Semitism, and politics of her adopted country gripped me from page one.–SUSAN J. MILLER, AUTHOR, NEVER LET ME DOWN

It is an astonishing feat to combine autobiography, art history, and French cultural history into a book that is also a page-turner. Eunice Lipton’s wise and loving book is like a personal letter to the world. It is filled with rare honesty and astute psychological insight. The book generates a desire for conversation…with one’s colleagues, friends, and loved ones.–JOAN ROSENBAUM, DIRECTOR, THE JEWISH MUSEUM, NY

Growing up [in the Bronx] in a predominantly working-class Jewish neighborhood..Lipton watched her relatives weep over photographs of Nazi concentration camp detainees. From that moment on, “looking at pictures” would “always be intertwined in my mind with the murder of Jews.” How fitting, then, that her fascination with pictures–especially those of the French Impressionaists–would lead her to immerse herself in French culture, only to be traumatized by its own history of anti-Jewish sentiment. “Didn’t I know the French were anti-Semites?” she asks, reflecting on the bigotry of Edgar Degas and Auguste Renoir…. [Lipton also] invokes the sensual delights Paris affords. Identifying with one of Francois Boucher’s luxuriant, Rococo nudes, she declares: “I want to chew and lick and wallow, far from rules and regulations, where boys don’t get more than girls, where I can live eternally anchored in pleasures that never go away.”–NEW YORK TIMES SUNDAY BOOK REVIEW

This 214-page book is [Eunice Lipton’s] clear-eyed, delighted and, at times, anguished look at her love-fear relationship with France. An art historian, a social critic and a memoirist, she brings all her skills to bear in examining the history and art of the French. And she does so within the context of her life as a Jewish-American woman and her complicated relationship with a father who tempts and repels her. Lipton luxuriates in the French love of pleasure…. She writes that, for an American, “Daily life, like a lullaby, is soothing.” But Lipton is also angry at the longtime racism, present drift toward fascism and casual anti-Semitism…. “I am haunted by the Collaboration,” she writes. “I was born in 1941, and that is perhaps explanation enough. I now live in a country that would have sent me away.” In facing France’s harsh paradoxes, Lipton also comes to grips with the jagged puzzle pieces of her past. In regard to both struggles, she writes, “I know that fear eats the soul and love pushes the horizon to infinity. That’s what I’ve learned living in France. It’s why I stay.”–CHICAGO TRIBUNE

[Eunice Lipton] is an excellent guide to the psyche of the French. She knows art and history, ancient and modern, and she understands the country and its people….she reminds us–and herself–that “France was the only conquered nation whose government officially collaborated with the Germans,” a country that 10 years later “tortured and massacred Arabs in Algeria.” … Lipton falls in love with Impressionism, those sunny canvases that paint “a small piece of the truth,” but so well “that we never think about what’s not there.” But she also knows their dirty secrets–that “one day she would be forced to acknowledge what I was leaving out of my own picture, so that I could continue admiring Degas”: that this man a “a cheap and ordinary anti-Semite.” …”Is that why I’m here in France? Because it is such a locus of maddening extremes: seduction and betrayal, beauty and ugliness, love and hate? Because it’s such a tease?” she asks. It is a special pleasure to stroll alongside Lipton as she explores the possible answers to these questions.–NEW JERSEY JEWISH NEWS

The author tries to broker a peace between both her own conflicts and those of her beloved France. She skillfully draws from examples in history, literature, and art to establish the great duality of France’s nature: on the one hand idealistic, generous, refined, enlightened, and chic; on the other racist, anti-Semitic, and xenophobic—a former leader in the arts quickly sinking into complacency. While she is drawn to paintings of the leisure class engaged in sybaritic pleasures, she is tugged back to her working-class roots and to her indignation over social injustices. But where Lipton can—and does—acknowledge her contradictions, she makes it clear the French are not so willing to concede theirs.–LILITH MAGAZINE

Eunice Lipton’s disturbingly delicious book French Seduction [is] a story about her own equivocal love affair with France. With a meditation on seduction, betrayal, and loss, Lipton takes the reader on an aesthetic and emotional odyssey in a book that is part memoir, part travelogue, part art history, and part ethnography. Descending into the caverns of memory, Lipton explores the desires, tactile pleasures, and rich sensualities that make her love of places and people and things at once compelling and frightening.–blogcritics.org

Spurred, in part, by her father’s unrealized dreams, art historian Lipton…left New York for Paris with her husband, a painter, in 2000. In this extended meditation, she gracefully weaves together her eclectic feelings of love and fury toward her father, a Jew who immigrated to the U.S. from Latvia, and toward her seductive adopted country. She considers the widespread French collaboration with the Germans during WWII-and finds echoes in how the French have treated immigrant Algerians. Drawing on her deep knowledge and love of French art, she includes reproductions of some of her favorite paintings and sculptures…. Passionate, critical and discursive, this account feels very French.–PUBLISHERS WEEKLY

In her new book French Seduction the Paris-dwelling American art historian Eunice Lipton eulogises the sensual delights of French food…. [But] the French are bitterly upset by what has happened to their country, that la gloire française has lost its lustre. “The French can’t understand what’s happened,” writes Lipton. “They used to have the best country in the world. Now you can’t get a new chip for your cell phone in less than two weeks. They never noticed things like this before or cared, but now they know it’s faster in London or the US or Germany. Or India!”… Lipton suggests that the French do not want too much change. “Political differences among the French evaporate in their shared abhorrence of the liberal economies of ‘Anglo-Saxon’ countries . . . And many would like to linger in their past and make all the foreigners go away.”–THE GUARDIAN, UK

Lipton, the author of Alias Olympia (1993) and other books…divides her time between New York and Paris…. “Why am I so angry?” Lipton asks. “Didn’t I know the French were anti-Semites? Everybody else knows.”…. This is truly a love-hate relationship with France, told with compassion and sensitivity.–BOOKLIST

An American art historian now living part-time in France loves its cultural and sensual pleasures…but condemns French xenophobia and anti-Semitism…. [Eunice Lipton] credits her father, in fact, for her early passion for Paris….Floating just below the sometimes-turbulent surface…are memories of the physical attraction the author felt for her father…. She spends some pages on the Dreyfus Affair, blasts the French for their eagerness to accommodate the Nazis during World War II, says searing things about their current treatment of Muslims… In one effective section, she dissects the typically French attitudes of the Impressionists: They painted happy, appealing people picnicking and boating on sunny days, yet many of those painters, whom she so admired in her youth, were anti-Semites of the most appalling sort. An attractive picture postcard with some hard words on the reverse.–KIRKUS REVIEWS

The title [of this book] couldn’t be more accurate, more succinct or more evocative. Lipton, from early childhood, was a sucker for all things French, and that’s what makes her the perfect writer to wrestle with the complex problem of French xenophobia and the country’s complicity during the Nazi occupation….–TheJewishExponent.com

[Lipton’s] intimate reflections lend her writing stylistic breadth that locates it somewhere between personal diary entry and cultural essay. This balancing act produces a singularity that is very affecting…. [Translated from the original French]–NONFICTION.FR